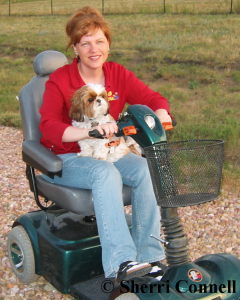 As a little girl, I had so many hopes and dreams with a heart and zest for life that seemed unstoppable! I quickly became a workaholic, as I often worked two jobs, attended classes, sang and danced in musicals, performed in choirs, modeled, rode my horse and lifted weights; I was definitely a workaholic!

When I was in college, I began getting symptoms of a neurological disorder. I often got “pins and needles” up and down my legs and spine. The pain and electricity was excruciating and my immune system had completely dismantled. Even so, I was not about to give up my active life and worked despite high fevers, bronchial pneumonia and vomiting.

I continued to pursue my acting and modeling career and had finally received a few offers that would be my “big break.” One day I was in the car listening to a Christian radio station when they were talking about seeking out our “images” and focusing on what others think of us. I had never been a conceited person; quite ironically, I was very insecure and thought I was ugly.

I had asked Jesus into my heart at the age of 14, but I really had not let Him be the King of my life. At this point, I was famished with anorexia and never did fit into the “cut throat” side of the industry. So, I began to pray about God’s will in my career decisions. Much to my amazement, the Lord proceeded to bombard me with songs and discussions on the radio that spoke to me as if He were giving me a direct answer, “No, Sherri. I do not want you to take these worldly jobs.”

Fortified with what I believed was God’s will, I wrote my agent a letter of resignation and nevefr  looked back. I then decided to give my talents to the purpose of the  Kingdom. I joined a Christian band and began writing Christian musicals. I went back to college and obtained a degree in Human Resource Management, as well as a degree in Christian Leadership. My thesis was on Drama and Music Ministry.

Shortly thereafter, while enduring another severe bout with pneumonia, I went to step out of bed and fell flat on my face. My left leg was completely asleep, as I could barely move it. Even so, I continued to drag myself into work and school, still battling pneumonia, because nothing was going to stop me!

Nevertheless, despite my utter determination, I continued to rapidly worsen until I could barely even sit up and was paralyzed from the ribs down. I was admitted to the hospital for tests and treatment for one week and released with a diagnosis of Multiple Sclerosis.

Honestly, I was not very frightened. God was truly carrying me through it all. I figured I would go home and rest for a few weeks then get back to work. After all, I had never let being sick get in the way before and I could still wheel into work and on stage, so the chair was not an issue for me.

Much to my dismay, a few weeks passed, then a few months and then a year. It was then discovered I also had Late-Chronic Lyme Disease from a tick bite when I was 14. I was still so sick, like I had the flu every single day. I had regained some of the feeling and use of my legs, but still could not stand or walk very far.

Many more years passed, as I lost my career, my dreams, my hobbies and most of my friends. Why, after I gave up huge opportunities for His ministry, had He taken that away as well? I had all the faith in the world that He could heal me and even had tried every medication, surgery, treatment and supplement I could try; but He kept saying, “No.” So, what purpose could He possible have for me in this state?

From the time I was first diagnosed with MS, I started writing in my journal here and there, regarding living with chronic illness. One day my husband, Wayne, came to me with an idea. He wanted to put some of these thoughts up on the internet, in order to educate our friends and family about my disability. Wow! How much easier that would be to ask someone to go to the website to read, rather than having to explain to everyone again and again!

Well, we had no idea what was about to happen with this seemingly insignificant website. Despite our narrow vision, God took this little fish and loaf of bread and multiplied it beyond belief! I never could have imagined that from my home, sprawled across my chair, with wrinkled pajamas and dirty hair, my thoughts could reach out to thousands of hurting people! But it did! We received countless e-mails and letters from others living with chronic conditions, spouses, siblings, physicians and other authors, telling us this book and website have changed their lives!

Soon, people started asking, “Where is God in all of this?” and “Why does He allow suffering?” Moreover, often believers tell those of us who live with debilitating conditions that they must not have enough faith, they should pray more or they must be hiding a sin. Some of these things can be true in some instances, but jumping to the conclusion that someone who lives with faith and trust in the Lord is ill as a result of their doing can be extremely hurtful. Because we were running into this so much and found out others were too, we began posting links to articles and some of our journal writings about faith and suffering. Where Is God Ministries was then born to help others find answers, truth and encouragement in their journey.

At any rate, the Lord is faithful to complete HIS work. After all, He is using me in a much mightier, more vital way than being on Broadway, in a magazine or on some commercial ever would have been! “I will turn all my mountains into roads, and my highways will be raised up” (Isaiah 49:11). Praise the Lord!

So, where does this leave the workaholic, ambitious, goal-oriented, Sherri? Although my body and mind will not cooperate, she still lives on inside me. This is a tremendous struggle, because I continue to mourn my business career and theatre ministry.

Not only that, it also grieves me to miss out on social activities, singing and having children. I even mourn the loss of being able to do things that everyone else resents and complains about like cleaning, cooking, shopping and running errands! Not an hour goes by that I don’t come up against things I can no longer do.

I will be honest- it is so very difficult to see everyone around me striving to “do it all,” when I am to the point that I would be happy with just “some of it.” Living with a disabling illness can be extremely challenging, isolating and frustrating.

People want to invite us over for dinner or out to a movie, but they are afraid to disturb us, which leaves us feeling lonely and abandoned. What is more, we need help, but we feel too guilty to ask because often people say they are just too busy.

When you pray for me, and for others in my situation, please do not just pray for healing; also pray for perseverance, joy and peace. We need God’s strength to endure the constant storm, until He decides to remove our pain.

I know without a doubt that our Lord can choose to repair this body at any time and I want that more than anyone will ever know! Thus, I will continue to earnestly hope and pray for healing. However, I have learned that true faith means believing that God knows best, even when He tells us “no.”

Proverbs says, “Trust in the Lord with all of your heart and lean not on your own understanding; in all your ways, acknowledge Him and He will make your path straight” (Proverbs 3:5 & 6). Therefore, although I hope and pray He heals me tomorrow, today I must seek His will in everything I do. When I am fixated on my will, I become depressed and miss out on the amazing work He is already doing through me… just as I am.

Copyright 2004 – Sherri Connell – Testimony of Her Life with Disability