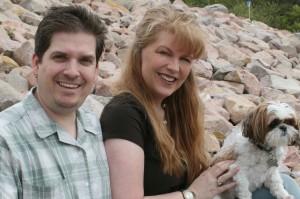 Born in Illinois and raised in Colorado, Sherri started dancing and singing before she could even walk and talk. She lived a normal, healthy life until she was bitten by a tick and contracted Lyme Disease when she was 14. Right away, Sherri began having chronic headaches and a weakened immune system.  Even though she often had the flu or bronchitis, she remained active in high school as she worked, sang in choirs and was a cheerleader.

In order to put herself through college in Grand Junction, Sherri often worked 2 jobs while she kept busy singing and dancing musicals, riding her horse, lifting weights and being a cheerleader. She began to develop neurological symptoms as she would get pins and needles running up and down her spine and legs. At times, she would even lose the use of her legs and be bedridden with high fevers. Yet, that was not about to keep her down.

Despite Sherri’s goal-oriented, workaholic outlook, in 1991 Sherri was stopped in her tracks. What started out as another bout pneumonia, turned into paralysis from the ribs down. She continued to work for several months with a high fever, until her body completely gave out and she could not take another step. Thought to be a slipped disc in her back, Sherri was hospitalized for tests. After a week, she found out it was not a disc, but instead it was Progressive Multiple Sclerosis.

Though this seemed to be grim diagnosis, Sherri had no fear. She said, “I knew that God was with me and figured this was just another hurdle I would soon overcome. I was not about to let the wheelchair stop me from working and wheeling myself up on stage to give God glory in song.” She thought she would just need a couple of week of rest to overcome the unbearable pain and fatigued that had consumed her. After all, “No illness had ever stopped me before and it was not about to stop me now!” she shouted.

Much to her dismay, these unbearable symptoms never went away or even faded. Once an extremely active person, Sherri now struggled just to take a shower or go to a doctor’s appointment. Through much physical therapy and the use of steroids, Sherri regained the use of her legs. However, it is still very painful and difficult for her to sit, walk or stand.

One year after her diagnosis, Sherri met Wayne. Sherri decided she would just give Wayne the whole truth from the very beginning. To her surprise, he did not run, as other young men had before him. Wayne says that people are always shocked to find out that he married Sherri knowing she was ill. Wayne always tells them, “I married Sherri, not her illness.”

Almost 15 years later, Sherri still struggles daily with bone-crushing fatigue, severe pain, cognitive impairments, insomnia, paralysis, blurred vision, dizziness, nausea and more. She likens her fatigue to having a severe case of the flu so bad a person cannot go to work, let alone get out of bed. On top of this, she also contends with infections and other medical complications. Many people often ask her if she is “tired.” Sherri prays daily that someday she might feel that good. Every step and every move feels like she is trying to move a mountain, as she needs help with cooking, shopping, cleaning and rides to doctor appointments.

Sherri also has Multiple Chemical Sensitivity disorder that has worsened in the past couple of years. When exposed to various chemicals, she experiences severe neurological reactions, migraines and autoimmunity (where her immune system attacks her cells, brain and spinal cord). These toxins can come from known products such as paint, glue, carpet, stains and cleaning products. Nevertheless, we rarely think twice about the chemicals that are most often the culprit, which are perfumes, colognes and synthetic fragrances.

Through Sherri’s research, she has discovered that there are approximately 36 million Americans living with MCS to differing degrees. In addition, there are about 26 million living with asthma and 50 million with autoimmune disorders, most of which also report serious reactions to perfumes and fragrances. The presence of these chemicals has caused a barrier around grocery stores, public buildings, family gatherings and even churches for Sherri and millions of others.

From the time Sherri was first diagnosed with MS, she started writing in her journal here and there, regarding living with disabling, chronic illness. One day Wayne came to her with an idea. He wanted to put some of these thoughts up on the internet, in order to educate their friends and family about her disability. “Wow! How much easier that would be to ask someone to go to the website to read, rather than having to explain to everyone again and again!” she thought.

Sherri and Wayne say that many believe that an impairment must be visible by the onlooker, in order to be real. On the contrary, many like Sherri are limited by symptoms that come from and damaged cells, nerves, tissues, joints and organs that are not apparent from the outside. In order to describe this situation of being disabled by these symptoms of illness and pain, they came up with the term, Invisible Disabilities and named the site, The Invisible Disabilities Advocate.

Well, Sherri and Wayne had no idea what was about to happen with this seemingly insignificant website. “Despite our narrow vision, God took this little fish and loaf of bread and multiplied it beyond belief!” exclaimed Sherri. “I never could have imagined that from my home, sprawled across my chair, with wrinkled pajamas and dirty hair, my thoughts could reach out to thousands of hurting people!”

Since starting the site, Wayne helped Sherri put together a booklet called, But You LOOK Good! People from all over the world have requested this booklet. Wayne and Sherri have also spun off a Christian version of the site called, Where Is God Ministries. WIGM’s purpose is to reach out to those with God’s hope and love amidst suffering, as it offers their newest booklet, Not By Sight. They have received countless e-mails and letters from others living with chronic conditions, spouses, siblings, physicians and authors, telling them how their booklets and websites have changed their lives!

Wayne and Sherri’s articles have been used in newsletters, magazines, newspapers, support groups, hospitals and more around the globe. Wayne has volunteered thousands of his hours giving seminars, being interviewed on the radio and sending out booklets. Wayne is the Founder and President of both organizations and feels called to be a full-time missionary to this hurting community, just as soon as the organizations receive necessary funding. Please keep them in your prayers, as they move forward with the ministry God has appointed them.

In September 2005, Sherri was presented with the Hal O’Leary Inspiration Award at a dinner hosted by the Colorado Rockies on Coors Field. This award is given to “individuals making a significant difference in the disabled community.” Sherri feels this award stands for all the losses and pain that she suffers, as it recognized those living with Invisible Disabilities. Sherri explained, “The Lord is faithful to complete HIS work. I may not be singing and dancing on Broadway or climbing the latter of my career, but He has given me a greater purpose… to be a voice for those living with disabling chronic illness and pain.”